The Schuetzen Park is always looking for quality performances and performers. We are especially interested in bands, singers, dancers, story tellers etc from German speaking countries. Please contact us at the address on the Contact Page if you will be in our area and wish to be considered for an event at the Park.

Davenport’s Schuetzen Park has long been involved in the “green revolution”. The park already boosts solar panels, a composting toilet and water retention and purification ponds. Recently, a vertical axis wind turbine was installed to supplement the production of power by the park’s solar panels, which are often affected by the cloudy winter days, as well as sometimes being covered with snow and ice.

Sometimes called a “Savonius” wind turbine, the vertical turbine form was invented by the Finnish engineer Sigurd Johannes Savonius in 1922. Although this configuration is not the “norm” in the wind turbine world, it did find it’s niche at Schuetzen Park for various reasons.

The vertical axis wind turbine has a much lower profile and is less visually intrusive. These types of turbines are more easily mounted on existing roofs, poles, or similar areas that are likely to be windy. More importantly, a vertical axis turbine is much less likely than propeller style turbines to harm flying wildlife such bird, bats and butterflies.

Produced in Laer, North Rhine-Westphalia (Nord-Rhein-Westfalen), Germany, the Park’s 220 Watt ElvWiS-II “Windrad” is mounted to the roof of the Jens Lorenzen Pavilion and is doing it’s intended job of providing supplementary power the park’s 8-6 volt deep cell batteries which store electricity for use at the park. Funding for this project was provide by the Schuetzenpark Gilde, the Waste Commission of Scott County and Thrivent Financial, West Scott County Chapter.

The historic street car pavilion at Schuetzen Park is once again adorned with colored lights. The lighting replicates those once found on the structure that was built in 1911 with a bequest from Davenport Brewer Heinrich Koehler.

The project was approved by the Davenport Preservation Commission and implemented by volunteers & members of IBEW local 145. Financial sponsors for the project included the Scott County Historic Preservation Society, Quad-City Questors and individual donors.

The pavilion, which was listed as one of the top 10 most engendered historic structures in Iowa in 2011, is slowly making a "full recovery". Funds have been requested to apply a fresh coat of paint in the spring of 2017 and the ceiling will be restored in late 2017 or early 2018. 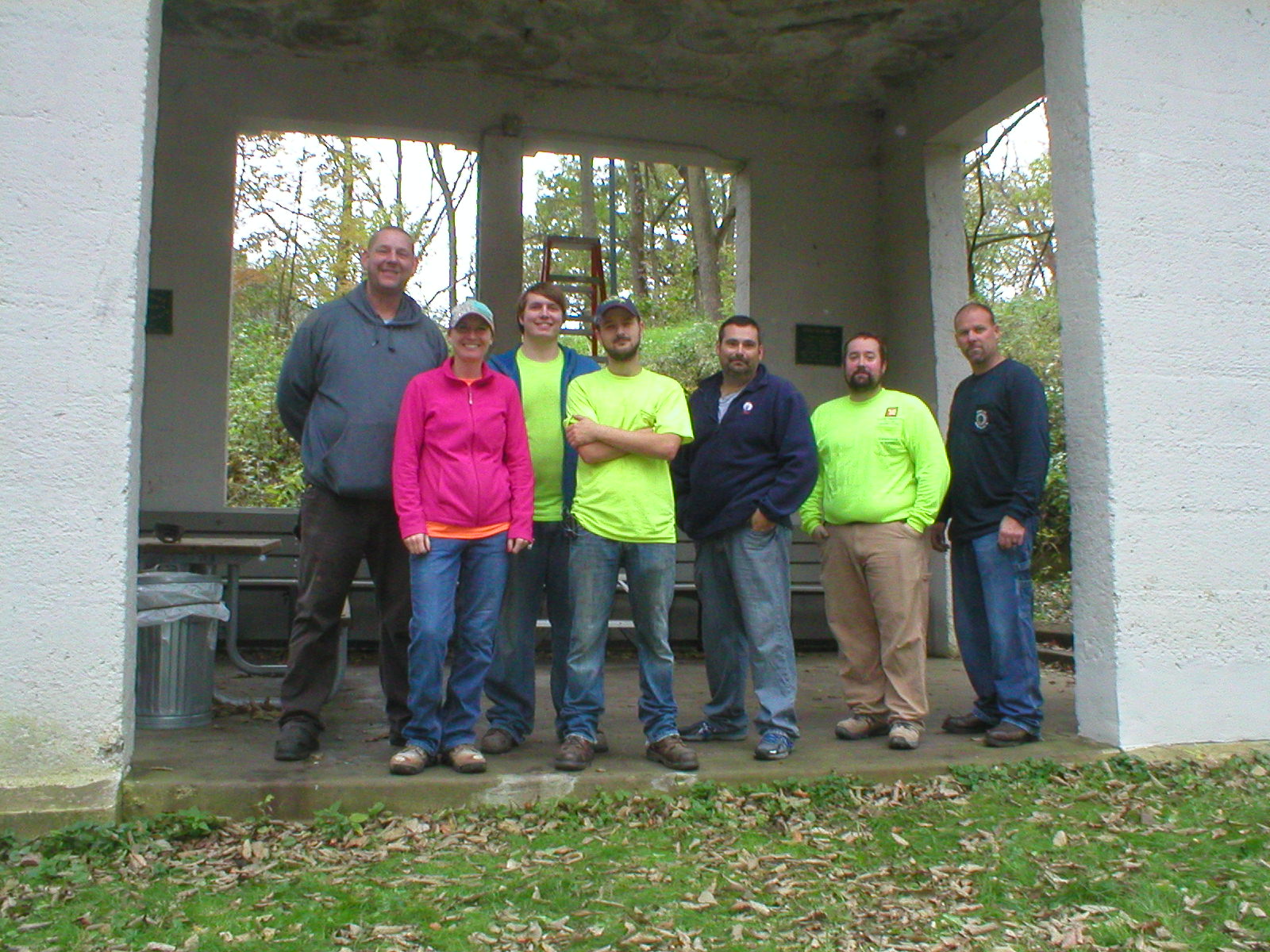 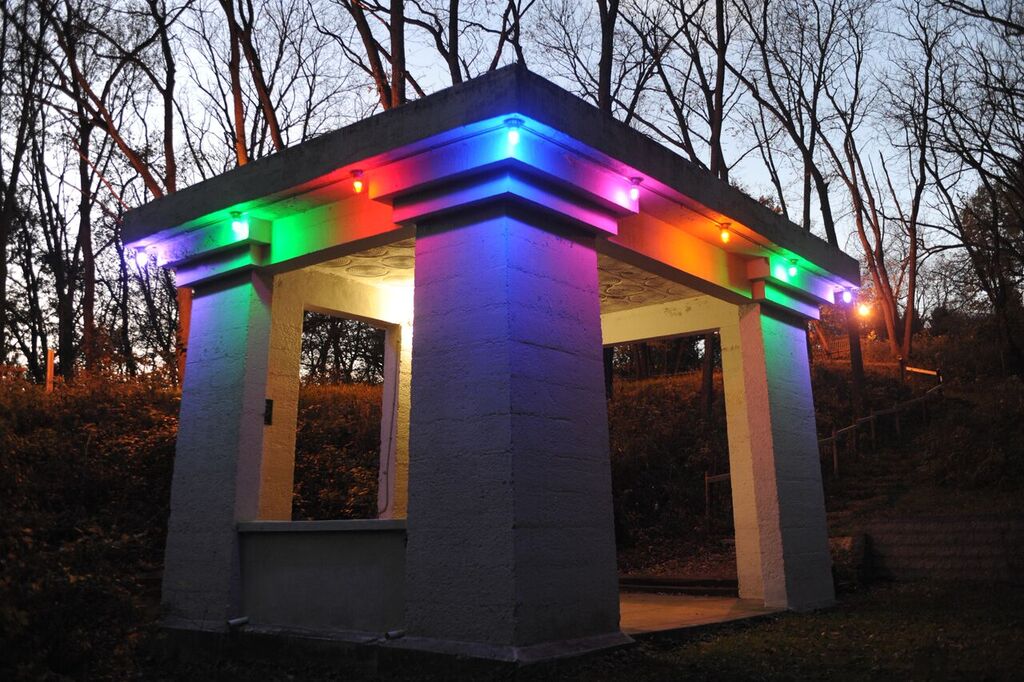 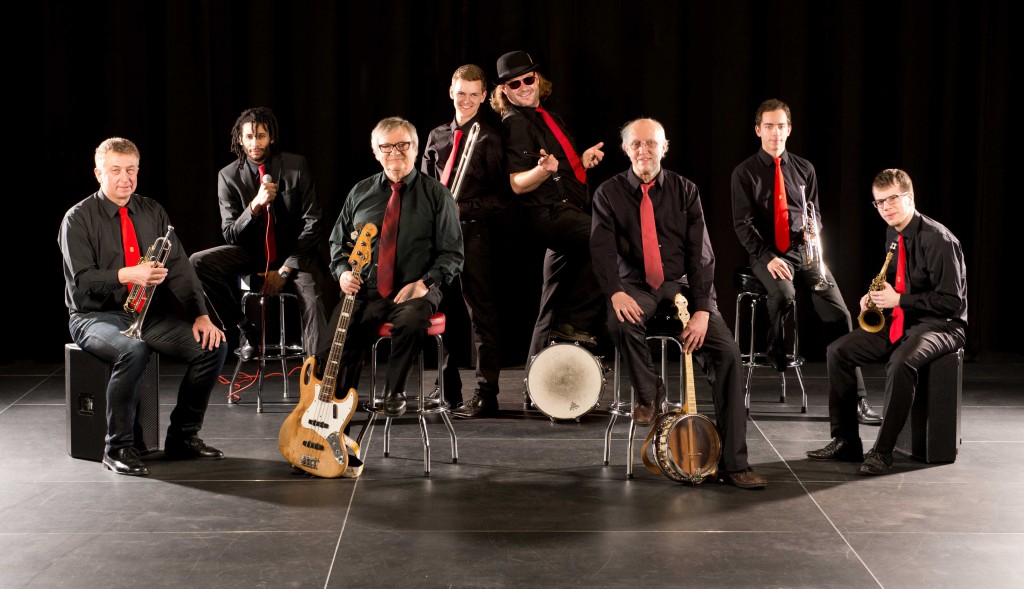 This event is sponsored by the German-American Clubs of the Quad Cities.

Beginning on May, 1, a weekly Stammtisch will take place at Schuetzen Park. A Stammtisch is a gathering of people to discuss a topic of mutual interest. From 1:00 - 3:00PM each Sunday, German speakers of all levels can join in on the fun of learning more about "die deutsche Sprache". There will always be something good to eat and drink served from the kitchen of the Jens Lorenzen Pavilion and there will games, discussions of current events, sports, travel and even hikes in the woods - all "auf Deutsch". Participants will be able to take German language magazines home for free as well. The Stammtisch will be held each Sunday in May, June and July... even on holidays.

For more info call the Park at: 563-449-2358 or email SchuetzenPark@yahoo.com
This event is sponsored by the Mel McKay Stiftung and The Schuetzenpark Gilde.

Paranormal Activity at the Park? 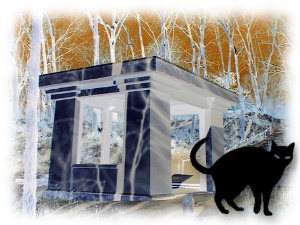 On May 23, 2008, six members of the Paranormal investigation group NIXPART, a subdivision of IPART investigated Schuetzen Park upon request after reports of strange sounds. (Click here to find out more) 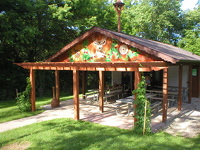 The Jen Lorenzen Pavillion at the Schuetzen Park will soon have beautiful Hops vines growing on a new pergola recently constructed there. The pergola, while acting as a trellis for the hops, will also provide shade for the new brick patio underneath, which was installed last fall. Thanks to the Moline Foundation and the Mary Iva Gittens Knouse Charitable trust for the funds to make these improvements. 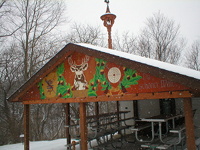 St. Hubertus is the patron saint of hunters. The stag emblem of St. Hubertus is the central theme of the new mural on the Jen Lorenzen Pavilion at Schuetzen Park. Designed and painted by Davenport artist Sarah Robb, the mural also includes on the left the Davenport Turngemeinde logo, and on the right the Schuetzenverein logo. The mural was funded by the City of Davenport Neighborhood Beautification fund and private donations. In the spring of 2014, a pergola will be added to the front of the pavilion as well on which hops vines will grow. 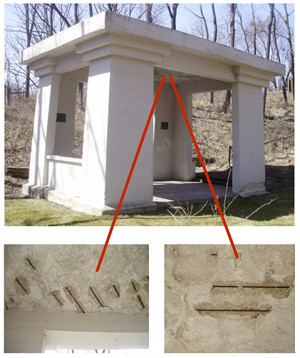 Fund raising for the second phase of the restoration of the historic streetcar pavilion at Schuetzen Park began in February with an initial gift of $1,000 from the Roy E Murray Trust. Phase II consists of the renovation of the pavilion's ceiling and beams.

Original reinforcement rods in the ceiling have corroded and have caused the concrete to crack and fall off. These areas will be cleaned, coated with new concrete, sealed, and painted.

Thanks to gifts from the Riverboat Development Authority and the Roy E Murray Charitable trust, phase two of the restoration will begin this summer. Critical repairs to the pavilion's roof supporting beams will be completed as will some cosmetic improvements to the exterior of the structure. Donations for this ongoing project are still gladly being accepted. Anyone wishing to contribute to this project may make a donation on the "Support" page of this website. 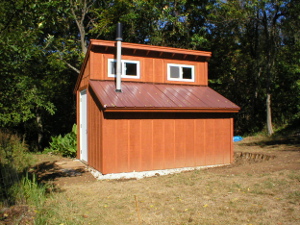 A restroom/storage building was constructed this summer by the Carpenter Training Center of the Quad Cities. The building houses a composting toilette which requires no water and very little maintenance. The project was funded by the Riverboat Development Authority and the Waste Commission of Scott County. Volunteers from the Training Center and the Schuetzenpark Gilde contributed many hours to the completion of the shed. 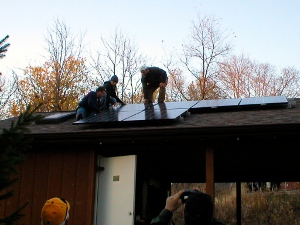 The term "green" is often misused and misrepresented, however, this is truly not the case at Schuetzen Park. All the Park's electric energy needs are now being met by a recently installed solar energy system. Students from Eastern Iowa Community College's (EICCD) Renewable Energy Program recently installed the system at the Park. Grants from the Doris and Victor Day Foundation, The Waste Commission of Scott County and donated materials from EICDD made this project possible. A full account of this project can be viewed in more detail in January's issue of "Radish" magazine.

We recently discovered 25 new copies of our 2nd edition book ìSchuetzenpark: Davenportís Lost Playlandî. We are happy to make these copies of this out-of-print book available for the original sale price of $20.00 + $2.50 postage media mail only). This book is the most definitive publication ever written about the famous shooting park. Printed on archival quality paper and containing some 40+ photos and illustrations, this soft-bound booklet will never again be printed. All books are numbered and fewer than 750 copies were ever printed. 100% of the proceeds from the sale of this 64 page book benefit the Schuetzen Park Historic Site. To order please send your payment to: Schuetzen Park 3401 Schuetzen Lane Box 224 Davenport, IA 52804-4353. 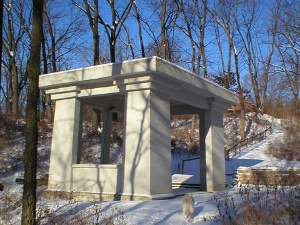 November, 2011: The roof of the pavilion was recently replaced, thus completing the most important stage of the building's restoration. Bi-State Masonry completed the removal of the old decayed roof material and installed a new layer of concrete on the roof as well as a protective coating to seal the roof. However, there is still much to be done on the building, but these projects will have to wait until sufficient funds are in hand. A list of the donors for this initial stage of the project will be added to this update in the near future. 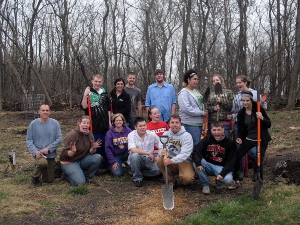 For the 15th consecutive year, the Schuetzen Park Historic Site has conducted it's annual tree planting. Students from Davenport West High School Ecology Club and Western Illinois University joined volunteers from the Schuetzenpark Gilde to plant 30 Chestnut trees on April 9th near the Park's "Hasenheide". A second round of tree planting will occur later in the month and will include oak, sycamore, catalpa, hemlock, birch and crab apple trees. The project is underwritten by the Trees for Teens Grant Program which is funded by the Iowa Dept. of Natural Resources Forestry Bureau, MidAmerican Energy, Black Hills Energy, Alliant Energy, Iowa Bankers Association, Trees Forvever, Iowa Tree Farm Committee, and the Iowa Woodland Owners Association. Individual donors to the Schuetzen Park also helped fund this project. Individuals wishing to donate toward this tree project, or sponsor a tree in the park, may still do so by sending a tax deductible donation to the address on the "Contact Page" or through our on-line donation process on the "Support Page". 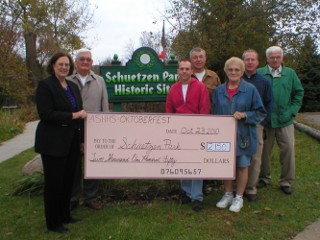 The German American Oktoberfest committee of the American Schleswig Holstein Heritage Society donated $2,150 of the proceeds from their annual event to the Schuetzen Park. This generous gift will be used to maintain the park, present cultural events and preserve historic artifacts.

Volunteers Needed To Help In Park

We can use your help in a variety of ways at the Park. Projects within the Park may include trail maintenance, placing mulch, working in the flower beds, cleaning benches and tables etc. Please email SchuetzenPark@yahoo.com for project dates and opportunities.